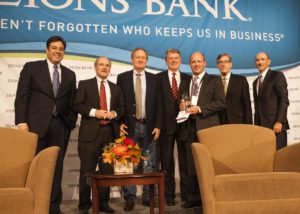 Idaho Forest Group of Coeur d’Alene was the inaugural recipient of the Idaho Pacesetter Award Wednesday at the Governor’s Trade and Business Conference presented by Zions Bank in Boise.

The State of Idaho and Zions Bank created the Idaho Pacesetter Award to recognize a company that demonstrates the state’s tradition of hard work and pride in a job well done. The award honors a Gem State company for its success, growth, leadership and contribution to the state’s economic vitality.

“Idaho Forest Group exemplifies the can-do attitude of business leaders across Idaho, and is poised to accelerate into the future,” said Zions Bank President and CEO Scott Anderson. “We applaud the leadership of Marc Brinkmeyer and Scott Atkison, who have grown Idaho Forest Group into one of the largest lumber producers in the nation and fueled job creation in northern Idaho.”

Idaho Forest Group was selected to receive the award by a committee of individuals representing state and federal agencies as well as representatives from Zions Bank.

“We are grateful and honored to be part of this incredible event,” said Idaho Forest Group President Scott Atkison, who accepted the award on behalf of the company at the conference. “We applaud the leadership of Scott Anderson and the entire team at Zions Bank for creating this platform from which Idaho companies are recognized and have an opportunity to learn from each other.”

Zions Bank operates 26 full-service financial centers in Idaho and 100 financial centers throughout Utah. In addition to offering a wide range of traditional banking services, Zions Bank is also a leader in small business lending and has ranked as the No. 1 lender of U.S. Small Business Administration 7(a) loans in Idaho’s Boise District for the past 13 consecutive years. Founded in 1873, Zions Bank has been serving the communities of the Intermountain West for more than140 years. Additional information is available at www.zionsbank.com.