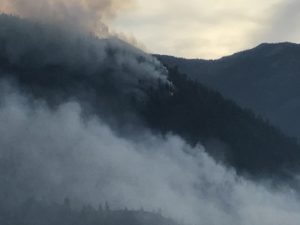 Over 8.5 million acres have burned in the United States this year.  In the West, massive and catastrophic fires are becoming a predictable norm common enough to NOT stand out in history books.   Many factors contribute to this trend, some of which have accumulated from human influence on forest dynamics and some resulting from a warming shift in recent decades.  Although the causes are complex and interwoven, we currently only know of one tool to change this trend; removing dead and dying forest materials.

What’s the Cost of Fires?
The cost of these fires is impossible to calculate including: structures lost, timber lost, carbon emitted, soil loss, water quality degradation, the impact of smoke on health and economies, firefighting expenses, and the incalculable cost of lives lost…  Yet, one cost we know is the 2.2 billion dollars the US Forest Service (USFS) has spent fighting fires this year.  This is fifty-five percent of the agency’s budget, compared to just fifteen percent in 1995.  If nothing changes it is predicted that only a third of the budget will remain to fulfill their non-fire programs which contain the management of federal forests, including timber harvest, creation of recreation opportunities, and wildlife habitat improvements.

Each year, the USFS is allotted a fire budget based off the average cost of fighting blazes over the last ten years.  This cost is going up most years leaving the ten-year average short, consequently the USFS must “borrow” from its general operating budget without any capability of refunding those dollars.  These funds supply fire-fighting tools, personal, and they do not generate revenue.  This year the USFS has had to borrow 400 million dollars that were meant to be used to fulfill the mission of the agency: managing federal lands.  Fire borrowing is eating up the USFS budget and creating a vicious cycle in which less forest is managed, leaving more fuel to burn, creating fires that cost even more to fight.

What’s the Answer?
Nowhere is this as big of a threat as in Idaho where forty percent of our land mass is federally managed, with over 16 million acres of that being forested.  Federal forests often border state and private lands leaving them vulnerable to spreading fire.  USFS dollars to manage these lands continue to burn up in fires leaving Idaho and many other states searching answers.  The answers include changes in legislation to help the USFS fix its funding issues and restricted management capability.  Changes have begun, but it is a slow process moving through Congress.

Right now, Congress is mainly focused on finding a fix to fire-borrowing.  Each year, the USFS has lessening funds available to treat the 60 million acres of designated unhealthy forests. Currently, members of Congress are reviewing a number of bills and attachments to bills that will label large forest fires as “natural disasters.”  Recognizing that huge fires are disasters will allow federal assistance funds to cover costs beyond the designated USFS fire budget.  As a result, the USFS will be able to plan and complete the forest management activities that they were designed to implement.

Federal forests are one of America’s greatest riches and it is in our best interest work together to support the agency tasked with managing these lands.